Students at BMet College gained inside knowledge of West Midlands Mayor, Andy Street’s, life and job role this week – at a special live Q&A highlighting his nine months in post.

Now in his second term, learners and employees were invited to find out more about Andy’s experiences and his involvement with regional community issues so far.

Participants across BMet’s colleges asked Andy probing questions that mattered to them, including those relating to employment, public transport, housing, homelessness, the NHS and race/culture.

The region’s road to recovery following the effects of Covid 19 was also discussed.

Charmaine Burton, the honorary secretary and Peter Borg-Bartolo, the chair of the Lunar Society hosted the event.

Speaking of the special occasion, Jan Myatt, Vice Principal, Matthew Boulton College, said: “Having the opportunity to hold events that invite our students into the world of politics and community issues, is invaluable.

“Our students and staff alike were all very engaged and we were pleased that many relevant questions were asked in a kind of ‘Question Time manner.’” 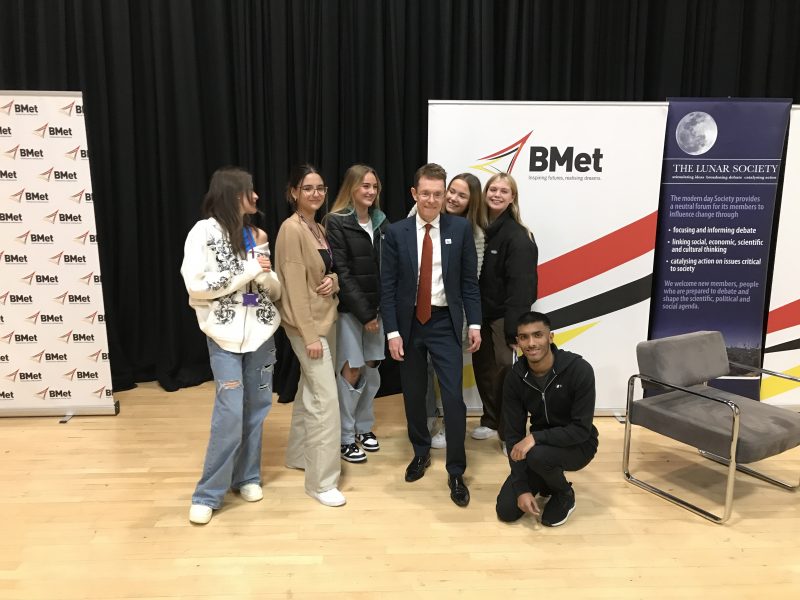 The Q+A session followed the triennial Hustings, also held at the college’s Matthew Boulton campus site last April, ahead of Andy being elected as the Mayor.

Dr Peter Borg-Bartolo added: “Andy Street’s presentation resulted in a very constructive and positive discussion about the problems being faced and solutions under consideration.

“The Lunar Society is extremely grateful for the time and space being made available by BMet to allow such a discussion, which will act as a further step in bringing about the necessary change in Birmingham and the West Midlands”

Andy Street was elected as the first Mayor of the West Midlands in May 2017 and then re-elected to serve a second term in May 2021.

Before becoming Mayor, Andy combined a career with John Lewis, with a host of high-profile economic development roles, working with local and national government.

Speaking of the event, the star of the show said: “I was pleased to be able to reflect on priorities for my second mayoral term with the Lunar Society, as well as interact with a very thoughtful group of BMet students who asked some great and wide-ranging questions.

“Indeed, it took me back to the cut and thrust of the mayoral debates organised during the campaign and I look forward to maintaining a dialogue with BMet and the Lunar Society in the coming months and years.”