Three students and one lecturer from BMet’s Media department are putting their creativity into action this summer, through innovative roles specially designed to showcase the Birmingham 2022 Commonwealth Games.

Being part of the exhilarating extravaganza right on the college’s and their own doorsteps in Birmingham, makes the occasion even more special for the media team.

Jake Holder, who is studying an extended diploma in media, is one such excited member of the team.

After impressing interviewers with his abilities and enthusiasm, he has gained a paid shadowing opportunity with Birmingham Ceremonies Ltd – who are producing the Opening and Closing Ceremonies for the Birmingham 2022 Games.

Working within the broadcast department across various locations, including the Alexandra Stadium in Perry Barr is a perfect fit for Jake, who aspires to work within film production in the future.

The budding film maker will be helping to spotlight the Games alongside a highly experienced team, including globally renowned TV director Hamish Hamilton.

Jake will have the opportunity to get involved in a variety of hands-on industry specific activities to generate content for the Games, that will be broadcast live during the Games. This could include interviewing athletes, filming and editing.

Speaking of his once in a lifetime opportunity, Jake expressed: “I am really looking forward to being a part of such a special and globally recognised occasion. I will be able to build on the great experiences and support that I have gained at BMet’s James Watt College, whilst increasing my broadcast knowledge and skills from experts in the field including, Hamish.

“Even better, my experience will take place alongside state-of-the-art equipment and facilities – so it’s all a dream come true and a golden ticket for me to progress in my career!” 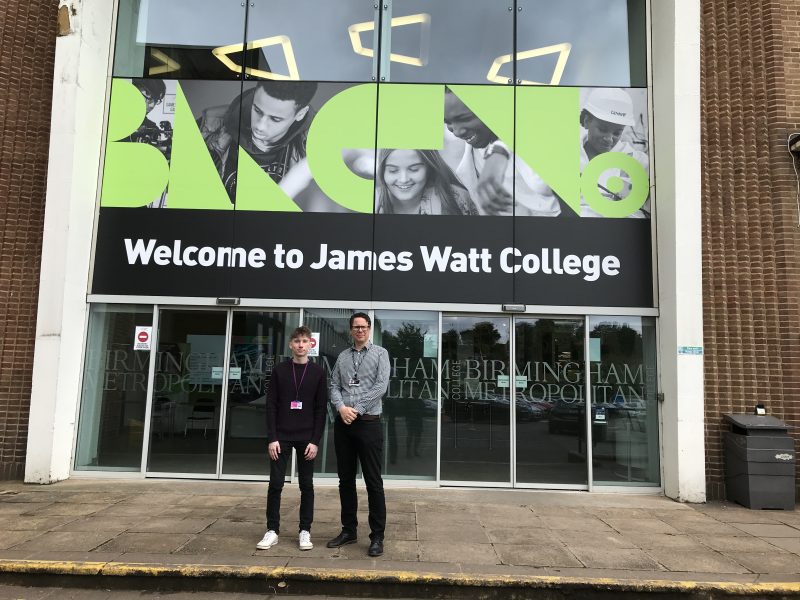 Alongside Jake’s exciting upcoming role, Ian Rivers, Media and Games lecturer at the college is joining two of his other students to volunteer with an embedded functional area of the Birmingham 2022 Commonwealth Games.

Ian and HND media and communications students, Galass Mbaye and Yamikani Ajuti, will be involved in roles that are instrumental to sports presentations before the start of the Commonwealth Games Medal Ceremonies, as well as live duties during event proceedings.

Galass and Yamikani, are really looking forward to their roles as Camera Assistants for the Games.

Galass, who will be a Camera Assistant at Weightlifting and Par Powerlifting events at the NEC, expressed: “This will be such a special and rewarding experience for me and will help me gain a wealth of knowledge and skills that will be needed for my future career.

“My desire is to work within TV, whether behind the scenes for an existing production company or maybe someday the dream would be for me to have my own media company. So, this opportunity is helping me get even closer to realising my dreams! I feel so proud to play a part in this historic occasion and will share my experiences with my friends and family!”

Yamikani, who is eagerly awaiting his role as a Camera Assistant at gymnastics events at The Arena in Birmingham added: “I am so looking forward to a fun and rewarding summer being part of spectacular event that focuses on sports, which I love!

“I just feel ready to get involved and can’t wait until it all begins. Those close to me are so proud of me too, which is a great feeling. After this opportunity, I feel sure I will gain first-hand and real experience of being a camera man, which is the career area for me.”

Ian has been selected as an Audio Playback Operator at the Triathlon in Sutton Park and Mountain Biking in Cannock Chase. This means he will be assisting with creation of music stings, playlists, cueing and playing music to the venue PA.

Speaking of his role and his involvement in the Games, he said: “It is not only a fantastic and once in a lifetime opportunity for my students and I to play a significant part in such a phenomenal occasion which has global recognition, but also it will leave a positive legacy for BMet as a whole for current and future generations.

“It will all be an invaluable experience and networking opportunity for everyone involved and will support the students’ future career progression and development.

“I personally feel so happy and honoured to be a part of it all and the experience is already amazing!”

You can find more information about the Birmingham 2022 Commonwealth Games here. Also, don’t forget to check out our website and social media channels to find out more updates about BMet’s involvement in B2022!

To discover the array of courses provided at BMet, which include media opportunities, please visit our website.